Chief Dexter M. Williams is a native of New York and is of Jamaican decent. He credits programs such as the Boy Scouts of America, Boys and Girls Club and other faith-based organizations for providing positive experiences and mentorship. He started his law enforcement career working as a detention officer for the State of Florida Department of Juvenile Justice. He has a passion for working with children entering the judicial system and has worked closely with at-risk youth through outreach programs in Broward and Miami-Dade counties.

Chief Williams has served in the law enforcement industry for 25 years and the citizens of Miramar since 1993. Throughout his tenure he has served as the commander of several divisions within the police department, including Patrol Operations, Internal Affairs, Field Training Operations, Criminal Investigations, Crime Scene/Property & Evidence, Domestic Violence/Victim Services, Citizens Volunteer Programs, Recruitment, and Executive Officer to the Police Chief. He was appointed assistant chief of police in 2013 and appointed chief in 2016. Chief Williams currently holds a Bachelor’s degree in Public Administration, and a Master’s degree in Management and Justice Administration. He is a graduate of the prestigious FBI National Academy and is affiliated with numerous professional and civic organizations. 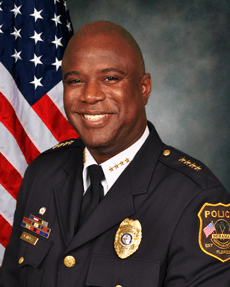 Chief Williams has a vested interest in the city of Miramar. He has been a resident for more than 20 years. He has earned numerous awards and recognitions, including a proclamation honoring him for his many outstanding achievements. Chief Williams continues to work today with various non-profit organizations and affiliates to reach our juvenile population.